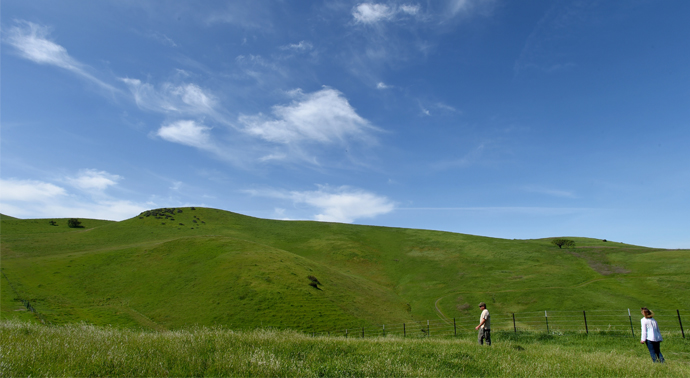 Livermore’s appeal to the California Supreme Court in an effort to erase their Appellate Court loss was unsuccessful.

The Garaventa Hills Lamphier-Gregory Environmental Impact Report (originally prepared by Rebecca Auld of Lamphier-Gregory) was upheld as defective on July 13th 2022 by the California Supreme Court. The case remains officially published, despite the additional request by the City of Livermore to have the decision “depublished”. As such, it is now “California Case Law” which can be referenced in other environmental lawsuits indefinitely.

On March 30th 2022, a three-judge panel on the California Court of Appeal First District ruled in favor of the residents who brought the case.  The Livermore City Council erred in allowing a housing development to proceed on the environmentally sensitive property.

The proposed “Garaventa Hills” housing tract was to be located in Northeast Livermore between Laughlin Road and Vasco Road, just north of Altamont Creek School.  For nearly a decade, developers attempted to push their plans through the City’s processes, only to be repeatedly thwarted by a myriad of unmitigable environmental consequences that would result from development.

The Appellate panel of judges agreed with the Save the Hill, who argued that the City Council failed to adequately consider whether Garaventa Hill could be purchased and preserved in perpetuity for conservation as a part of a “No-Action” EIR alternative. Lafferty Communities, the applicant and developer at the time, paid for the EIR, then court actions, all the way through the eventual defeat.

Conservation funds have been available to buy it for decades, and the California Environmental Quality Act requires that there be appropriate attention applied to a “no project” option as part of the EIR certification process.  The funds were left completely out of the Report, as Lamphier-Gregory failed in their due diligence to include conservation funding as part of their research and discovery process. Without this vital information, even after being asked to provide it by the plaintiffs during public testimony, the City Council’s certification of the EIR violated the law.

What is an EIR – why did Lafferty Communities need it?

An Environmental Impact Report is required by California law whenever a new proposal will have enough potentially negative effects on the environment to be of significant concern. This is a very broad description, and the law has many complex parameters and requirements. If we attempt to peel back several layers of metaphorical curtains, here’s a very abbreviated example of how one might be created.

After a developer decides that it is worth risking capital for the chance of making a profit, it all begins by a public agency’s staff being approached about starting a permitting process to build a project . The agency, in this case a city council and staff, invokes a “positive declaration” to indicate a developer’s proposal will require a legal EIR prior to permits being issued. A private company that specializes in writing these lengthy documents is required.

An environmental consultant is first retained.

Typically, the developer will prefer a company with a reputation that supports the likelihood of success, not necessarily one that leans toward environmental protection, as the stakes are very high if the report doesn’t get certified. Here’s where the potential for conflict of interest begins and the players start to dance an ethically loaded tango.

By law, the agency (council in this case) is the customer of the EIR company. This is because the council should be looking out for the best interests of the residents, and the primary allegiance of the EIR company should be to the council and residents. However, it is nearly universal that the agency will include a side deal with the developer where council will not be liable for the costs – the developer pays. While the council has the final word in choosing the EIR company (the one often requested by the developer), the REAL customer is the developer, and they will generally demonstrate their partnership all the way through. Corrupt? Unethical? There is nothing illegal about this sort of out-in-the-open money laundering.

In the Garaventa case, Lafferty may have lobbied for Lamphier-Gregory in part because of their extraordinary success in another controversial local project: The Sunol Valley Aggregate Quarry. Similar to Garaventa, the conversion of a productive stretch of farmland to a gravel quarry faced stiff opposition from virtually every environmental group that spoke on the matter. The locals were infuriated by the prospect, and made every effort to derail the progress. Lamphier-Gregory’s EIR was a resounding success, as the property was converted and not stopped by a successful lawsuit.

It is no surprise that Lafferty was able to get a friendly EIR consultant to be contracted by Livermore. The deck was stacked against the residents from the outset. The weak approach by Lamphier-Gregory to expend only minimal effort to include a legitimate “no project alternative” was ideal for Lafferty’s interests. It was also their downfall. Unfortunately for them, and fortunately for Livermore residents, that’s illegal. The Supreme Court said so.

More about the attempted “depublication” of the ruling

Save the Hill‘s Supreme Court win was a powerful message to any California agency that is required to adhere to CEQA. There are many public and private interest groups who generally prefer to avoid protecting the environment, as it can get in the way of their development plans. After the Appellate Court victory, no less than five separate entities decided to take action.

With the goal of making it harder to protect the environment in the future, they thought it would be wise to try to cover up the ruling by requesting “depublication”. They submitted their requests to the only remaining court that could do it – The California Supreme Court. If successful, future development strategies would no longer face the inconvenience of complying with the newly enhanced CEQA power.

It didn’t work. As a published case, Save The Hill Group v. The City of Livermore is far reaching and widely relevant. For the record, the five requestors were:

The effect of the published ruling is that in the future, any plan for new developments that do significant damage to the environment must include a genuine study of a “no-project alternative”. This means that there needs to be a sincere effort to investigate any and all ways a damaging project can be avoided in order to protect California from unnecessary harm. Not all development projects threaten the environment, so this ruling does not unduly impede development in California. But, if you want to abuse the environment for profit, you can’t do so in an illegal manner, or as easily as before.

Will there be another EIR ordered by the City (Developer)?

At this time, the various players are not saying much.

Attempts were made to contact Lamphier-Gregory in order to gain some insight, but they did not want to speak with us. We hope they might reconsider, as we want to make sure the information we post is accurate and fair. One particular item we would like to explore is a statement they made about the project. “Lamphier-Gregory was also asked to help the City negotiate the process of choosing an identified alternative in place of the project at the Final EIR stage.” This was precisely the issue that the justices called out most explicitly in ruling against them, so it seems odd to have promoted this service to Livermore as a “value added” feature.

After such a publicized defeat at the supreme court, one might speculate that Garaventa Hill is too hot to handle, and Lamphier-Gregory may decide not to participate again. Other environmental consultants may also need to carefully consider the potential downside as well.

For eight long years, the resident opponents did what they could without a well equipped skill set guiding their activities. Though poorly armed, they brought their case all the way to the Supreme Court and won. Now, the same people are more motivated, have a GREAT Environmental law firm, are apparently well funded, highly visible, and have newfound political power. It seems unlikely that Lamphier-Gregory will reenter the fray, but why would any competent environmental consultant want to walk straight into a buzz saw? Lafferty is a wild card.

As for the Lafferty Communities, they have said very little. They are active on Facebook, but seem to ignore their Yelp page which has a 1 star rating. In an interview with the San Francisco Chronicle just after the court defeat, attorney Alicia Guerra stated, “Lafferty Communities remains fully committed to its in-fill housing project in the city of Livermore which will offer needed excellent and affordable housing to the community.”

The process itself would really be a return to where they started in 2011, but from an even more disadvantaged posture. It’s a lot of work, new surveys, a greatly expanded “no-project alternative”, etc. The public scrutiny will be substantial, and could be overwhelming.

Actions do speak louder than words though, and a bewildering action by PG&E did take place. A high capacity power line was run up to The Hill a few months after the court ruling. Apparently there was an old request for infrastructure and they failed to put the brakes on in time, as they were unaware that Garaventa Hill is no longer being urbanized. A lot of money went to waste.

What if Lafferty Communities were to restart the process?

The procedure would not be easy, quick, or cheap. An RFP for a new EIR has to be ordered by city staff, and they will be encouraged to exactly NOT prepare one. If an RFP is produced, this time it will be challenged. Then if it goes out for bids, bidders may be reluctant to participate (based on what happened to Lamphier-Gregory). If it receives bids, the applicants will become the subject of immediate public attention (and not the good kind). Don’t forget the Notice of Preparation, and the staff time it takes to process that prior to any work on a new EIR.

Unlike the passive exercises that took place in 2011, nothing will be left unattended. Active vigilance can be expected from the very first moment, now that the residents know what to do, and with a greater sense of confidence.

If all of this somehow gets as far as a draft EIR, it has to first go through planning commission and be posted as a public hearing item in advance. At the meeting, it will face unrelenting scrutiny and public input. That’s the first test of its survival, and if it somehow succeeds, then it will be on to City Council.

Once there, the same obstacles apply, and more. DEIR for public comments. Advance posting. City Council public hearing with expected opposition. In addition, Garaventa Hill is habitat sensitive territory that would be unlikely to obtain buildable evaluation. Even if a future council did certify one, it would undoubtedly face more lawsuits by an even better prepared legal team. Finally, the legal defense Lafferty employed did a splendid job, lost anyway, and it is doubtful Lafferty Communities could find more effective representation.

The story of Garaventa Hill is a tribute to what local residents can do if they are persistent in an attempt to pursue justified environmental protection. Neither a hostile City Council, aggressive developer, nor lack of legal sophistication or money can overturn the will of the people as long as it stays strong and resolute.